The process of interactive discussion, peer review, and publication in the scientific journal Nonlinear Processes in Geophysics (NPG) differs from traditional scientific journals to enhance quality by transparency. It involves a discussion stage, where public commenting on the submitted preprint by the referees, authors, and other members of the scientific community is invited. All participants are encouraged to stimulate further deliberation rather than simply defend their position. Authors are invited to take an active role in the exchange by posting comments as a response to referee and community comments as soon as possible in order to stimulate further discussion. The handling editor bases their final decision on the authors' response to all comments and their corresponding revision.

In all cases, also if no additional comments from the scientific community are received, a full peer-review process in the traditional sense, albeit in a more transparent way, is assured before publication of a paper in NPG.

For the public discussion of a preprint, authors can choose between two different platforms: a preprint under interactive public peer review for NPG can either be posted in NPGD, the scientific discussion forum of NPG, or on EGU's preprint repository EGUsphere. In both cases, the review process is guided by NPG editors and the NPG review criteria are applied.

The process includes the following steps:

The timing indicated above is a guideline which may have to be modified according to the availability and response times of editors, referees, and authors.

The submission of comments and replies which continue the discussion of scientific papers beyond the limits of immediate interactive discussion is encouraged. Such peer-reviewed comments undergo the same process of peer review and publication as described above: after appearance and discussion, they may also be published in NPG if sufficiently substantial.

If a manuscript that has been posted as a preprint is not accepted for publication as a final paper in NPG, the authors have several options to proceed as outlined under frequently asked questions, point 6. For further information on the definition and standing of manuscripts in discussion, please read the EGU Position Statement.

In the interactive public discussion, the following types of interactive comments can be submitted for immediate non-peer-reviewed publication alongside the preprint (manuscript in discussion):

The authors and editor of a manuscript in open discussion are automatically informed via email about comments in the interactive public discussion. Alert services are also available to other members of the scientific community. The interactive discussion is supervised but not actively moderated by the editors, who have the option of censoring comments that are not of substantial nature or of direct relevance to the issues raised in the manuscript in discussion or which contain personal insults. Authors are advised to follow the discussion of their preprint and to notify the Copernicus Publications Editorial Support and the handling editor in case of abusive comments. The NPG editorial board reserves the right to exclude abusive commenters.

All comments receive a DOI and are fully citable and archived. Comments can be composed by using the WYSIWYG editor for HTML content. More complex content can be uploaded as a *.pdf file and will be displayed as a supplement to the comment. Figures can directly be included in the comment. 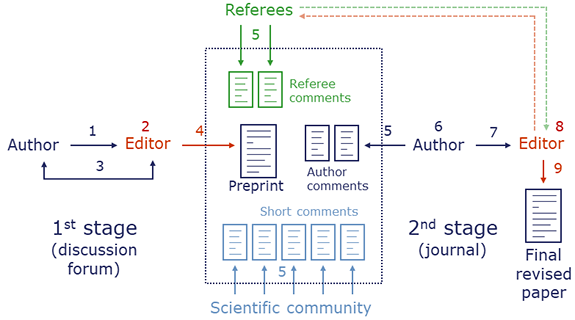